Whatever sort of items on an inventory it is used for, the approach works by setting all of them into three distinct categories. Therefore, ABC analysis is a system of categorization, using three classes, of which each class has a differing management control.

The ‘ABC’ in ABC analysis, as known as ABC Classification, refers to the three classes or categories used in the system. The first, A, is the category for items that are outstandingly important, or business critical. The second, B, is the classification for items of average or middling importance. Finally, category C is the designation for relatively unimportant items. As a basis for a control scheme, each class ought to be handled in a different way. As you might have guessed, more attention will usually be devoted to category A items, with less to B and still less further to C.

Many people are familiar with the so-called ’80/20 rule’, also known as the Pareto Analysis, which can be put to use with the ABC analysis for inventory management. Under this rule, in terms of consumption, 80 percent of the value of inventory would be held in about 20 per cent of the items. By using this principle, categories B and C would make up the remaining 80 per cent of the items, perhaps B with 30 per cent and C with 50 percent.

However, in terms of their consumption value B and C would make up on 20 per cent of the value combined, with C the least, perhaps split at 15 per cent and 5 per cent respectively. The percentages will vary based on a distributor’s unique inventory control needs.

This means that ABC analysis conforms with the Pareto principle which states that items that account for a large proportion of the overall value are small in number and that items with a low overall value are high in number. It is also worth remembering that the proportions of the ABC values, both in terms of their consumption value and their number of items, are not set in stone, so long as they add up to 100 percent.

Extensively used for supply chain management, inventory systems and stock checking methods, ABC analysis is often applied to the design of cycle counting systems. For example, a warehouse or factory store might choose to count A items, of high worth once a quarter, but B items only two times a year with and C items only counted once.

From an optimization point of view, companies looking to drive down working capital and carrying costs should be analyzing inventory far more frequently as these industry averages leave the door open for large quantities of excess stock and obsolete stock to pile up in warehouses. Unfortunately, most wholesale distributors and manufacturers do not put this into practice and as a result have a large percentage of working capital tied up in unhealthy inventory levels.

Stock checking and tighter control of higher value items not only helps to maintain a better idea of the value of assets being held at any one time, but also assists with reordering, whereby reorder points for the different classes are handled with their own controls, with perhaps less high-value items being held in stock at any one time and more frequent reordering of them done to compensate.

Likewise, slow moving category C items should not usually be re-ordered with the same frequency as B items because money will be tied up in stock as a result. Performing ABC analysis helps both wholesalers and distributors to identify which items should be brought into stock – and when – so that customer demands can be met whilst maintaining a healthy balance sheet.

One of the major industry challenges for warehouse and supply chain managers with ABC analysis is identifying when items could fall into one of two categories, perhaps A or B. With the rise of mobile e-commerce, social media and 3rd party retailers like Amazon, this means that items in inventory which were historically considered lower value can move into a higher category if shortages occur due to abnormal spikes in sales. It is the ability to pick up on these trends and outliers that helps with the necessary reclassification of a higher value item.

Another problem with ABC analysis is that it does not work with Generally Accepted Accounting Principles requirements, or GAAP, which are a common set of accounting principles, standards, rules and procedures that companies use to compile their financial statements. Because it conflicts with GAAP and other traditional costing systems, stock that is managed under ABC analysis commonly requires a second costing system, one for internal use alongside the ABC method and another one to comply with GAAP.

The ABC method requires more resources to maintain than traditional costing systems. When cycle counts are performed, class A inventory must be routinely analyzed to determine if the inventory still consists of high-priority items. If an inventory piece is no longer in demand or demanded has changed, it is moved to another inventory classification, which can be monitored through complimentary inventory optimization tools, like EazyStock. This constant process requires much more data measurement and collection.

The supply chain management sector is not the only place that ABC analysis can be used. Increasingly, large service sector companies have found that they have found the profitability analytics derived from the method are useful, perhaps not in terms of the number of customers, but in terms of transactions.

Retail banks and healthcare companies have both used ABC analysis successfully in the past and other service sector companies are also likely to benefit from the system in the future, particularly those with high transactional volumes, such as a internet retailers and e-commerce drop shippers that leverage 3rd party logistics services.

Let’s address the original question, what is ABC analysis for inventory optimization? ABC analysis is a tool within a greater subset of tools to help inventory managers and owners more effectively manage their inventory turnover and profitability. Knowing what items are business critical is the first step, but being able to make more educated decisions around stocking policies based on actual customer demand will drive actionable improvements in operational efficiencies.

When it comes to managing large volumes of inventory, simply managing the movement of those items is not an effective strategy to ensure your costs are properly managed and that stock levels are optimized.

Make sure you know what to look for in your warehouse! Download your free copy of our white paper and be on the lookout for these top signs! 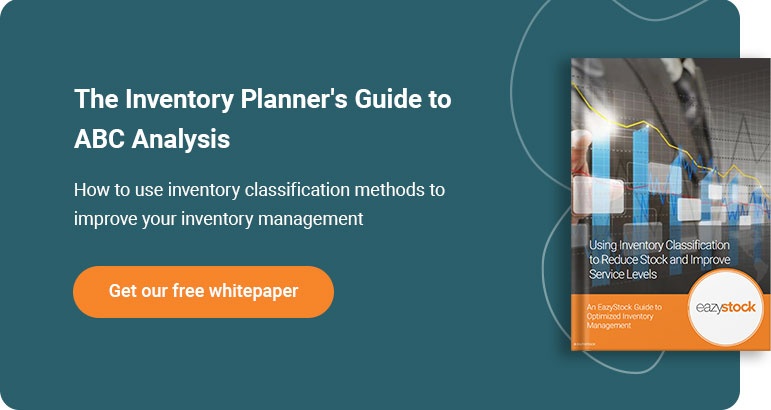