Effects of Brexit in 2018 for wholesale distributors

Brexit: The journey so far

Truth be told, the UK does not have an easy time ahead in coming years. The decision on June 23, 2016 for the UK to leave the EU (colloquially termed “Brexit” for “British exit”) has taken center stage of UK politics. Since the vote, the UK has seen David Cameron step down as Prime Minister, leaving PM Theresa May to oversee the UK’s secession from the EU. A lot has happened in the two years since the Brexit decision – and since our last article on how Brexit affects wholesale distribution in the UK – and discussions are far from complete.

PM Theresa May enacted Article 50 (a formal announcement of the UK leaving the EU) on March 29, 2017, thus beginning the countdown for exit and putting the stress on negotiations; the UK is leaving the EU on March 29, 2019 at 11:00 pm local time. While this is the defined “finish line” for Brexit, the UK does have an agreement with the EU on a 21-month transition period post-Brexit to maintain Europe’s economic structure (without seemingly pushing it off a cliff) and allowing for further negotiations.

But while the UK has made the decision to leave, the terms and details are proving difficult to agree upon.

Brexit developments within the UK

The most recent developments have occurred in the last month, starting with the publication of a white paper on July 12 this year, detailing PM Theresa May’s vision for the future relationship between the EU and the UK. This paper is the result of a discussion between the PM and the Cabinet at Chequers and outlines the UK’s negotiating position for upcoming discussions with the EU. The white paper addresses the decision of the UK “to take back control of the UK’s laws, borders, and money.” However, it wasn’t enough for some.

May’s stance is focused on a near-single market deal in terms of trade, ending free movement of people between the UK and EU, and minimising border friction as much as possible regarding tariffs. Overall, her intent for businesses with international supply chains is to keep those points running as smoothly as possible. But this pseudo-single market scheme, what is being termed a ‘soft’ Brexit, is not what some envisioned when they voted for Brexit.

Namely, cabinet ministers David Davis and Boris Johnson. MP David Davis got the ball rolling with his resignation from his post as Brexit Secretary, citing that he did not believe in the strategy outlined and that the UK was “giving away too much and too easily”. Brexiter MP Boris Johnson resigned from his position as Foreign Secretary in response to the released white paper, claiming that this soft Brexit leaves large parts of the UK economy “locked in the EU system, but with no UK control over that system.”

These resignations demonstrate the diminishing support for PM Theresa May as she struggles to get the best deal possible for the UK. The threat she faces now is a vote of “no confidence” which could oust her from office, though this requires 15% of the current Conservative MPs to submit letters requesting such a vote. This, however, would be a risky gamble for MPs since they do not have the guarantee of the number of votes needed to boot May out of office – and if they lose the vote, May has a year in which she is protected from another vote.

How the EU is handling Brexit

Not only is the UK facing inner turmoil and facing tough decisions, but the EU is also a force to be reckoned with regarding Brexit. So much of May’s existing plan depends upon successful negotiations with the EU, but the UK is facing an EU that is reluctant to grant concessions. For example, the UK is seeking to establish a “free trade area” for goods that would not be subject to customs when crossing borders while creating a “common rule book” for the rest. Europe, however, is digging its heels in and the more access the UK wants to the single market, the more the UK will have to continue to play by the EU’s rules.

What’s seeming more likely is a “no deal” Brexit. Two agreements must be reached regarding Brexit: the first is a withdrawal agreement which must be done before the deadline of March 29, 2019. If it is not completed by then, the transition period following the deadline will not happen and the UK will have an abrupt departure from the EU. The second is an agreement on what the future will look like between the EU and the UK. This is the bulk of current negotiations, including trade and borders.

A “no deal” Brexit would mean that agreements are not reached, leading to an abrupt departure from the EU for the UK. This would result in reestablishing border checks, no specific arrangement on future rights for EU and UK citizens abroad, and severing the UK’s connection to the EU’s single market. Without a bespoke arrangement for the UK among the bloc, the UK would fall back on the World Trade Organization (WTO) basic rules, substantially reducing the UK’s access to the single market.

What will the economy look like for wholesalers and distributors in the UK?

What does all this mean for wholesalers and distributors in the UK? Unfortunately, this is where planning gets muddled. The EU, taken as a whole, is the UK’s largest trading partner with exports totaling 44% of all UK exports and imports totaling 53% of all UK imports. While it is doubtful that this trade back and forth will come to a screeching halt when the 2019 deadline hits, still many industries have cause to worry about either losing partners, investors, or customers, and new tariffs for the same business.

46% of EU businesses that currently source from the UK are seeking to move to new suppliers within the EU, whereas only one-third of UK businesses are searching for UK suppliers over their current EU sources. The number of UK businesses looking to localise their supply chain will likely grow, but UK businesses need to start preparing for changes from Brexit now – which is especially difficult since neither the EU nor the UK know exactly what sort of deal will be hammered out in the end.

How to start preparing your business for Brexit

UK businesses are thinking that they can wait and see where negotiations are headed before taking any decisive steps to prepare for Brexit. This is a risky route to planning since Brexit talks will likely come down to the wire, and any changes a company makes will take time to implement fully.

The priority for UK companies should be identifying the risks that your company faces. The first step is to analyse areas where your company could be impacted. A few areas to keep in mind are your supply chain, how competitors measure up, the dipping exchange rate, and your workers. Are you sourcing a majority of material from the EU that could be subject to tariffs in the next few years? Are a large number of your workers from the EU? Will your profit margins narrow significantly as the value of the pound drops?

As you identify areas where your business will be affected, also keep in mind the various scenarios facing the UK in terms of Brexit negotiations: “no deal” Brexit, complete existing free trade agreement (unlikely), or a soft Brexit where the UK retains some beneficial trade benefits. How would each of these scenarios impact your business?

The next step is to prepare where you can. Even if your business is not directly affected by Brexit (which is highly unlikely), your suppliers or your customers will likely be feeling the effects and acting accordingly – meaning you need to be mindful of your process efficiency throughout your company and supply chain. One area that’s often overlooked yet can yield massive savings? Inventory management.

Staying ahead of Brexit

Inventory management is often a process that is well planned when it is first implemented but is not updated as the supply chain evolves and grows, leading to poor results and loss in capital. With proper inventory management, companies can not only cut down their inventory to include only what they need, but also minimise the time they spend on manual calculations and analysis – freeing up both capital and time. Small- and mid-sized businesses need to be particularly mindful of how they operate over the coming years as uncertainty around Brexit plagues the UK market.

Interested in learning more on how optimising your inventory management can help prepare your business for Brexit? Get a closer look at EazyStock’s offerings and see for yourself! 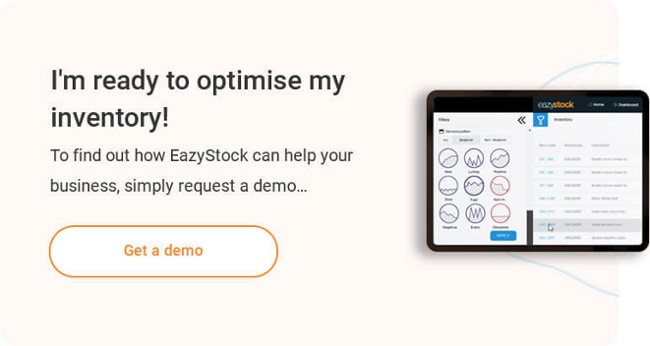 I have read and I agree to Syncron’s Terms of Use and Privacy Policy. By clicking on the “I Agree” button or by continuing to use our sites after you have received this notification, you accept that Syncron may use cookies or other technologies to ensure the proper functioning of this site, improve user experience and deliver content fully tailored to user interests and needs.I Agree